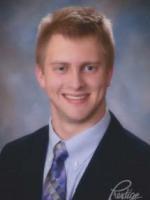 Stephen Gadomski, a native of Wilkes-Barre, Pennsylvania, graduated from the University of Scranton with a B.S. in Exercise Science.  As an undergraduate, Stephen examined the ability of L-citrulline and watermelon juice to improve exercise performance in college-aged subjects with Dr. Paul Cutrufello.  Continuing work with human subjects during a summer research fellowship, Stephen began to assess range of motion and postural adaptations in powerlifters.

After graduation, Stephen joined the laboratory of Dr. Jonathan Keller at the National Cancer Institute and began to study the intrinsic and extrinsic regulation of hematopoietic stem cell quiescence as an NIH Postbaccalaureate Fellow.  This research lead him to pursue an MD/PhD degree at the Medical University of South Carolina with the goal of studying stem cell and regenerative mechanisms that can be used to understand and treat human disease.

As an NIH-Gates Cambridge Scholar, Stephen plans to study the mechanisms that regulate skeletal stem cell differentiation into chondrocytes and osteoblasts in hopes to gain insight on the pathophysiology and treatment of skeletal disease.  Outside of the lab, Stephen plans to compete in the sport of powerlifting and to partner with healthcare teams to provide medical services to the poor and underserved.