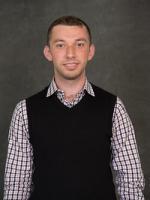 Born in Iraq and raised in Oman, Mario developed a love for science during his time at Al-Ibdaa International School in Muscat. He came to America at the age of fifteen, and at Henry Ford II High School he promised his AP Government teacher – who had Parkinson’s – that he would cure the disease. To that end, he studied neuroscience at the University of Michigan Honors College. In 2014, Mario joined the lab of Prof. Robert Kennedy and worked with Dr. Omar Mabrouk to understand changes in brain chemistry during Parkinson’s disease treatments. Using in vivo microdialysis followed by high-performance liquid chromatography (HPLC) and mass spectrometry (MS), he helped characterize changes in the levels of over 25 different neurotransmitters and molecules following L-DOPA administration or deep brain stimulation (DBS) in the brains of rats subjected to 6-hydroxydopamine lesions (a model for Parkinson’s). The following year, under the supervision of Prof. Alexander Zestos, he worked on his honors thesis showing a neuroprotective effect of sodium benzoate with lower levels of L-DOPA-induced dyskinesia in the 6-hydroxydopamine rat model.

During his last year at the University of Michigan, Mario designed and taught a short course offered to freshmen in the Honors College. The course examined the mystery and wonder of neurological diseases and discussed recent advances in neuroscience that have led to better treatments. Mario graduated magna cum laude from the University of Michigan in 2016. Later that year, through the International Program for the Advancement of Neurotechnology (IPAN), Mario studied multi-sensory integration with Dr. Malte Bieler in the lab of Prof. Ileana Hanganu-Opatz at the Centre for Molecular Neurobiology in Hamburg, Germany. There, he helped show that anatomical connections exist between visual and tactile pathways in the brain, and that the somatosensory cortex is involved in integrating tactile as well as visual information.

In 2017, Mario began his medical studies at the University of Chicago Pritzker School of Medicine. He completed two years of medical school and is now working with Dr. Derek Narendra (NINDS) and Prof. Patrick Chinnery (Mitochondrial Biology Unit) to understand the mechanism by which mutations in the proteins CHCHD2 and CHCHD10 lead to neurodegenerative diseases such as Parkinson’s disease and amyotrophic lateral sclerosis.