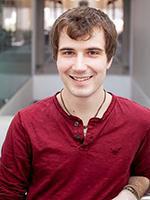 Charles “Chad” Coomer, a native of Louisville, Kentucky, graduated summa cum laude from the Honors College at Western Kentucky University (WKU) in 2014 as the Ogden Foundation Scholar with degrees in biology and chemistry and a minor in music. As a Goldwater Scholar, Chad completed an honors thesis to investigate the utility of bacterial viruses as a sustainable alternative to antibiotic treatment in the biofuel industry. While attending WKU, Chad developed an ambassadorial organization for the campus scholar development office, performed with the WKU Symphony as a violinist, which toured to China in the summer of 2013, and completed an internship and fellowship at the National Cancer Institute (NCI). While at the NCI, Chad addressed questions regarding HIV persistence and compartmentalization, using RT-SHIV-infected rhesus macaque and single genome sequencing. As a Fulbright Scholar, Chad organized outreach organizations designed to engage under-represented students in biomedical research, while completing an MSc in Infection and Immunity at University College London. While at UCL, he investigated Gag-mediated protease inhibitor resistance with Drs. Ravi Gupta and Katherine Sutherland utilizing genotypic and phenotypic analyses of patient-derived, non-subtype B Gag-Pro HIV clones. Upon completion of his MD and DPhil, Chad hopes to become a physician-scientist investigating the HIV reservoir, curative strategies, and pediatric infectious disease.