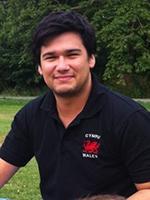 Andrei’s interest in a scientific career began in high school when he undertook a month-long research experience placement at the Department of Pathology at the University of Cambridge under the supervision of Professor Jim Kaufman. Here, he contributed to the understanding of the tissue distribution of splice variants of BG0 in chickens. Following this positive experience in the lab, Andrei went to Jesus College at the University of Cambridge to study Natural Sciences. During his second year, he was awarded both the JRS Fincham Bursary by the Department of Genetics and the Sir Robbie Jennings Award by Jesus College to help fund a summer internship at the Technical University of Munich. During this internship, he worked on acquired drug resistance of colorectal cancer cells under the supervision of Professor Roland Rad. He then returned to University to complete his degree and opted to specialize in Genetics in his final year of studies. He graduated in 2015 with a First Class degree and shortly thereafter started working at the Francis Crick Institute in London where he spent 10 months. During this time, he became increasingly interested in cancer immunotherapy and applied to the NIH Post-Baccalaureate Intramural Research Training Award program to work at the Vaccine Research Center with Dr. Robert Seder. Whilst at the NIH, he has been working to develop a novel personalized cancer vaccine platform. He aims to continue working in the field of cancer immunotherapy, with a specific focus on the interface between T cells and the tumor.